Charity Patron Pixie Lott, will talk about her own personal connection to young sudden cardiac death (yscd) as part of a national TV appeal for Cardiac Risk in the Young (CRY), to be aired this Sunday (February 21st at 1.50pm) as part of the BBC’s long-running “Lifeline” programmes.

25-year old Pixie has been involved with CRY for 6 years and is a loyal and proactive supporter of the charity. As part of the broadcast [which will also be available on BBC iplayer http://www.bbc.co.uk/lifeline] Pixie is also joined by two young people with a very powerful and poignant connection to CRY; James Bailey (25) was identified with a potentially fatal heart condition (which was successfully treated) during a routine screening organised by CRY at his school and Sian Donnelly (24) whose brother, Adam (a family friend of Pixie’s) died suddenly from a hidden heart condition, aged just 17.

Trinity has worked alongside the team at CRY for over 12 years, managing the charity’s busy press office and developing a number of campaigns to help raise awareness of the impact of young sudden cardiac death as well as CRY’s pioneering screening programme,

“It happened to someone I know…out of the blue. He was my big sister’s friend, and his name was Adam Donnelly. When Adam was 17, the family went on holiday to Cyprus with friends. One day everyone went to the beach, while Adam decided to stay behind to swim in the hotel pool. Adam was found floating in the pool. He was rushed to hospital, but his heart had stopped and doctors couldn’t revive him.

“When someone dies young, it’s always completely devastating to everyone around them and I remember the impact that Adam’s death had on my sister. And I still can’t quite believe that 12 apparently fit and healthy young people (aged 35 and under) die of undiagnosed heart conditions every week in the UK.

Pixie added: “Last year 23,000 young people aged 14 -35 were screened by CRY. It’s a completely free service that no one else offers. Over the years, CRY has raised millions for medical research, developing effective methods for screening and identifying young people at risk.

“The reason why there are over 600 sudden deaths each year is because young people who are fit and well, are not routinely tested for heart conditions. So CRY believe that a screening programme for everyone is the best way to save lives.”

Please go to the website bbc.co.uk/lifeline where you can donate.

You can also donate £10 by texting DONATE to 70121. Texts cost £10 plus your standard network message charge and the whole £10 goes to C-R-Y. Full terms and conditions can be found at bbc.co.uk/lifeline. 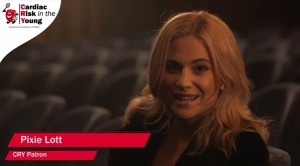