Trinity PR is proud to have been involved with the recent campaign to help challenge the way in which the public and health professionals perceive pancreatic cancer – which is set to overtake breast cancer as the 4th biggest cancer killer in the UK by 2030.

Eric Ollerenshaw MP for Lancaster and Fleetwood has led a determined and enlightening inquiry as part of his role as the Chair of the APPG on Pancreatic Cancer, recommending specific changes and updates to the management of this all too often devastating disease.

A new report; “Time to Change the story” (launched at a Parliamentary Reception on Monday 25 November) captured the attention of the Secretary of State for Health, Jeremy Hunt who joined Mr Ollerenshaw as he unveiled the latest recommendations from this important investigation. 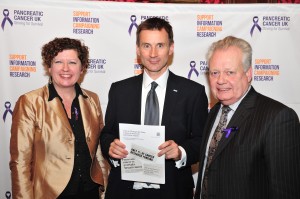 The campaign has also received support from celebrity ambassadors whose families have been personally touched by the condition including Madness frontman Suggs and Bo Bruce (BBC ‘The Voice’). 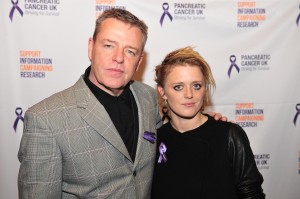 Pancreatic Cancer UK hopes this latest media campaign will make further headway in dispelling some of the myths surrounding the condition. As Chief Executive, Ms. Alex Ford explained to guests, pancreatic cancer is not rare, it does not only affect the over 65s and, on a more  positive note, is does not always have to be a death sentence.

The charity’s inspiring survivors – a number of whom were able to attend the event at the House of Commons, alongside Suggs and Bo – are living evidence that with the right diagnosis, care and treatment you can strive to survive.

However sadly, these extraordinary people are still in the minority and the reality is that pancreatic cancer has the lowest survival rate of all 21 most common cancers in the UK. It is also disturbing to learn that only 1% of research funding goes to pancreatic cancer, despite the fact there has been little improvement in survival rates in the last 40 years.

Alex Ford adds, “We feel very strongly that in order to improve pancreatic cancer survival rates we need to get more patients diagnosed more quickly and ensure that all those with suspected pancreatic cancer get the earliest possible input from experts at specialist centres. This means, amongst other things, giving GPs quicker access to diagnostic investigations and introducing the screening of high-risk patients.”