New statistics released by Trinity PR on behalf of London’s leading cosmetic and reconstructive surgeons have revealed that facial rejuvenation procedures are at an all-time high.    It has been found that the first month of the year proves to be the busiest time for cosmetic enquiries and referrals, with three times the general level recorded during the first week of January alone.    It seems that alongside diet and fitness resolutions, people are increasingly considering going ‘under the knife’ to improve their appearance and beat the January blues!

The Weymouth Street Hospital, one of London’s leading hospitals and a top cosmetic and reconstructive surgery centre in the UK, has in the last year seen an unprecedented rise in browlifts (up by 84%), blepharoplasty or ‘eyelid surgery’ (up by 41%) and rhinoplasty or ‘nose reshaping’ (up by 40%).  Facelifts are also up by a staggering 37%, with men requesting more and more of the treatments.

Undoubtedly, the 2014 year of the ‘selfie’2 and people’s desire to improve their profile on social media sites, has helped to fuel this upward trend of rejuvenation procedures. However, surgeons have also seen a new tendency for patients requesting a more ‘natural combination’ of treatment including fillers and fat transfers, so they don’t look as if they have had work done. Long-gone is the tight, over- operated ‘barbie-doll’ facelift instead patients are seeking to keep small imperfections to retain an overall natural look, yet youthful glow.

Bran Sivakumar, Consultant Plastic Surgeon at Weymouth Street Hospital comments; ”The new approach to face-lifting is to rejuvenate the face and neck giving a natural more youthful look and avoiding a tight and ‘operated’ result.  Fat transfer, also known as fat grafting has become particularly popular for the face, hands or breasts. Fat is removed from one part of the body and injected into another to create volume or contouring, to counteract the ageing process whereby the skin loses its elasticity.” 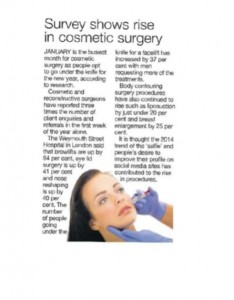 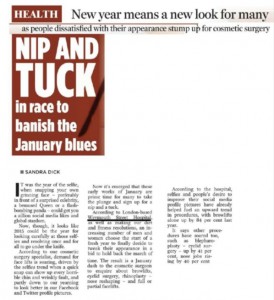