Trinity PR’s very own Francesca Levi (self confessed classical music groupie!) had the wonderful privilege of enjoying a Beethoven gala in at The Royal Festival Hall in aid of client Pancreatic Cancer UK.

Yesterday’s concert was a brilliant tribute to both the charity and Beethoven, a composer who against the odds, strived to celebrate the beauty of life.

The news earlier this week that the chemotherapy drug Abraxane® will be remaining on the Cancer Drugs Fund for this year, added to the positive atmosphere in the packed concert hall.  It was fantastic to see Britain’s emerging classical stars unite with some of our most established musicians and perform for a cause that impacts people from all walks of life. 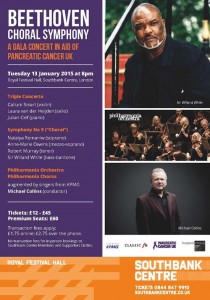 World famous clarinettist and Pancreatic Cancer UK ambassador Michael Collins changed his tune and proved his prowess as a conductor, eliciting charged and exciting playing from all the musicians. The concert began with Beethoven’s triple concerto, which was delivered with real spirit and finesse from young soloists Laura Van Der Heijdan on the cello, pianist Julian Clef and violinist Callum Smart. A composed and florid performance, the young soloists were extremely promising in their approach to the music possessing a youthful and energetic quality.  This lively trio also treated their audience to a cheeky improvisation before the interval, which was both a delightful and fun surprise.

The concert ended on an inspiring note with Beethoven’s 9nth, which arguably, is one of the most famous pieces in Western civilisation.  This iconic piece of music is full of reference to the human struggle and the eventual victory of hope and last night’s performance was a complete embodiment of this.  Operatic heavy weights Sir Willard White, Natalya Romaniw, Anne-Marie Owens and Robert Murray provided heroic and epic solos echoed by thrilling sounds from the orchestra and chorus. Last night’s tribute was proven evidence that Beethoven’s 9nth symphony is best enjoyed live and if you ever get the opportunity to experience this with world class musicians, it is a feast for the ears.

Thanks to Pancreatic Cancer UK for inviting us along to a wonderful performance that gave everyone there a real belief that even through the darkest of times music can provide profound comfort and hope.

If you didn’t catch the concert, the event will be broadcast on Classic FM on Tuesday the 20th .