The key aim of the event  – which was attended by families and patients affected by the disease, as well as MPs, researchers and key stakeholders – was to officially launch a new report from the All-Party Parliamentary Group on Pancreatic Cancer’s recent Inquiry on research [Pancreatic Cancer Research: a Roadmap to Change]

Chaired by Eric Ollerenshaw OBE, MP for Lancashire and Fleetwood, the report sets out the case for increased research funding, in line with recent calls for government and funding organisations to prioritise cancers of “unmet need”. Key recommendations include raising the funding to £25million over the next decade, to focus research activity on early diagnosis – including the future development of screening tools – and greater collaboration among researchers and research institutions.

Speakers at the cross-party event included the charity’s Chief Executive, Alex Ford and the Secretary of State for Health, Jeremy Hunt. 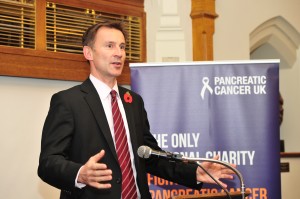 One of the charity’s most proactive supporters, Madness frontman, Suggs also attended with members of his family and spent the evening meeting and chatting to a number of MPs and other supporters of Pancreatic Cancer UK. Suggs first became involved with the charity following the death of his sister in law, Alanah, in 2012 from the disease;

Pancreatic cancer is the 5th most common cause of all cancer deaths in the UK and by 2030 is predicted to overtake breast cancer to become the 4th largest cancer killer. Pancreatic cancer has the lowest survival rate of all of the 21 most common cancers in the UK with only about 4% of people diagnosed surviving five years or more. This figure has hardly changed in 40 years.

Jo Hudson (Trinity PR) attended the event and commented; “Trinity has worked with the team at Pancreatic Cancer for over a year now and it’s encouraging to see the changes being made and the important steps being taken to improve awareness and highlight the importance of new research. Pancreatic Cancer UK has a real commitment to funding innovative new research projects – often led by young and inspiring researchers – and this year alone has awarded £0.5 million in Research Innovation Grants across the UK.  The charity is definitely “on a mission” to discover the “future leaders in research” and we’re all very excited about supporting them on this journey in terms of generating further awareness. 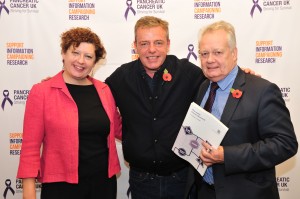