Sue and Chris Dewhirst (pictured below with Alison Cox, CRY Chief Executive and David Lynch, Assistant Producer, BBH) attended the official launch of a short new film campaign released by the charity, Cardiac Risk in the Young (CRY), to demonstrate the sudden, spontaneous and shocking nature of cardiac death in young people – especially in those involved in “grass roots” sports.   Sue was one of the speakers at the event and spoke movingly about the tragic circumstances surrounding her son’s death on the rugby pitch and the importance of building awareness of these heart conditions and screening.

The film follows a teenager boy on the rugby pitch, in the moments leading up to his sudden collapse on the field in front of team-mates and supporters. Tragically, this mirrors the experience of many bereaved parents who approach CRY for support – and often, seeking answers – in the aftermath of their devastating loss.

It was developed for CRY by David Lynch, an Assistant Producer at global creative agency, BBH London. The campaign was funded by a charitable grant awarded to David through BBH’s internal charitable grant scheme. The new campaign sets out to emphasise the importance of cardiac screening amongst young people (that is, aged 14-35) and the need for unexplained symptoms (such as fainting, blackouts and palpitations) to be explored appropriately and not dismissed.

Every week in the UK, 12 apparently fit and healthy young (35 and under) people die suddenly from a previously undiagnosed heart condition. In around 80% of cases, there will have been no signs, symptoms or warnings – underlining the vital role of screening. Indeed, CRY’s national screening programme now tests over 15,000 young people every year and it is estimated that one in 300 young people aged 35 and under who are tested by CRY are found to carry a potentially life threatening condition.

Sport itself does not cause young sudden cardiac death but intensive physical activity – particularly endurance sports such as rowing, rugby, football and long distance running – can exacerbate an underlying condition. 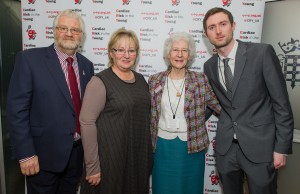 The Dewhirsts became involved with CRY following the sudden and tragic death of their only son, Matthew in July 2012, whilst playing rugby from a previously undiagnosed heart condition. He was aged just 17 and since his death, the family have become loyal and active campaigners and fundraisers for CRY.