This weekend (Sunday March 15th – Mother’s Day), bereavement experts from the charity Cardiac Risk in the Young (CRY) will be unveiling a powerful and moving new book for mother’s whose child (under the age of 35) has tragically died from young sudden cardiac death.

The booklet, ‘Young Sudden Cardiac Death: A Mother’s Grief’ which has been compiled by CRY’s Chief Executive & Founder and former bereavement counsellor, Alison Cox MBE, features 10 chapters from women who recount and talk through their personal experience of suddenly losing their son or daughter to a previously undiagnosed heart condition.

It will be officially launched to coincide with the weekend of Mothering Sunday – an important and special day for mothers across the UK, yet is one which will forever be unbearably hard for those women whose child has died. It is with this in mind that the bereavement support team at CRY developed this latest booklet in the charity’s ‘grief series’, knowing that bereaved parents – often find most solace and support from others who have been through a similar experience.

Alison says; “The impact on a mother of her child’s death is well documented but it is now properly recognised that they cannot be “replaced” by mother having another baby, “time does NOT heal” nor will mother one day “move on.”  Family members all grieve differently but in a battle to help her partner, her other children or her own parents, a mum can become totally swamped by the shared mourning of their intolerable loss. Yet, craving to hear or say her dead child’s name to keep their memory alive can result in her subconsciously excluding the needs of other family members”

Every week in the UK, 12 young (that is, aged 35 and under) people die suddenly from a previously undiagnosed heart condition.

This year CRY is marking its 20th anniversary, along with its many milestones and achievements. Trinity has been working alongside CRY for over 10 years and has had the privilege of watching the charity grow from strength to strength, with the development of a screening programme that now tests over 17,000 young people every year and a network of specialist bereavement supporters.

Since 1995 – and as awareness of young sudden cardiac death has grown – CRY has received thousands of calls from families wanting to speak to others who have suffered similar tragedies. CRY has found that in many cases, no matter how much professional support is offered, sometimes just talking to someone who has been through a similar experience, can provide. 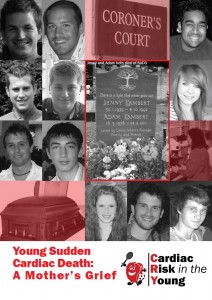