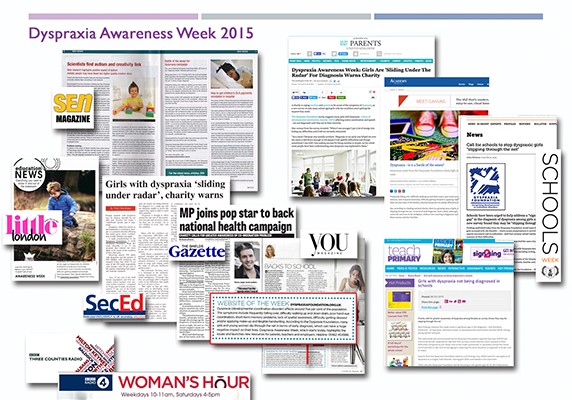 We have a strong heritage working with charities and not-for-profit organisations including The Dyspraxia Foundation, Cardiac Risk in the Young, Pancreatic Cancer UK and The Pelican Cancer Trust. We manage and promote annual awareness campaigns, cause-related marketing partnerships, celebrity liaison, as well as supporting charity parliamentary and public affairs initiatives.

We have worked alongside the pioneering charity, Cardiac Risk in the Young (CRY) since 2013 and now take full responsibility for the day-to-day management of its busy press office, all media relations, campaign development and strategic counsel.

As illustrated above a recent project for long-standing client, The Dyspraxia Foundation [“Is it a battle of the sexes?: Dyspraxia Awareness Week 2015] saw a huge return on investment for a relatively small charity but one which really “punches above its weight” (with over 20,000 Facebook fans and 9,000 Twitter followers).

A targeted media relations programme saw coverage on BBC “Woman’s Hour”, “You” magazine, The Huffington Post and a range of educational publications, with an audience reach of over 3 million and an estimated advertising value equivalent, AVE (excluding online sites and local radio) of around £50,000.

The team at Trinity has a strong heritage of supporting emerging health care technologies and working with organisations to raise brand profile and product awareness via media campaigns.
SEE CREDENTIAL

With an ageing population, the increasing need for care and support services for older people means that the care sector remains a much discussed topic […]
SEE CREDENTIAL

Charity & Not For Profit

Alison Cox, Chief Executive, Cardiac Risk in the Young "The team at Trinity listen to and understand our objectives, developing cost effective and creative PR programmes that deliver results. We deal with a very complicated issue and it is important that the message is transmitted sensitively and accurately.”
SEE CREDENTIAL

Trinity has worked as the Harley Street Fertility Clinic’s (HSFC) retained PR agency since 2012 with the aim of raising the organisation’s profile amongst consumers and healthcare professionals alike to help increase patient referrals.
SEE CREDENTIAL